Before I start, please remember that Daniel, my husband, is the beekeeper of our household and I just help with photographing the journey and in the honey extraction process, so my terminology and expertise is limited but I’ll do my best to explain the extraction process. I’m also going to include links to equipment used (or similar) on Amazon for those who are looking for the different tools they might need if they are considering beekeeping. Most local farm stores will have your basic supplies as well.

With that being said, we extracted honey on Sunday and ended up with about 4 & 1/2 gallons!  We were hoping for at least 2, so this was really exciting. This is only our third season of honey extraction: Spring 2015, Fall 2015, and now 1st day of Summer 2016. What a perfect way to kick off the first day of summer this was!

The process is a bit time consuming (and sticky) but so worth it once you see the “liquid gold”as my brother-in-law, Dimitry, would say.

Daniel has been keeping an eye on the hives all spring, checking the individual frames within the boxes to see how full they are getting and how many of the cells are capped by the bees, indicating they have filled the individual cells with honey and they are ready.  The pictures below will better explain 🙂

Here you can get a visual of what inspecting the boxes looks like. Daniel doesn’t always suit up, it just depends on whether or not he’s actually pulling out the frames for a thorough inspection. He’s pretty brave! He uses a smoker that helps to calm the bees before moving around the frames. Similar/same here  He uses the quickstart pellets with the smoker to create the smoke. Similar/same here 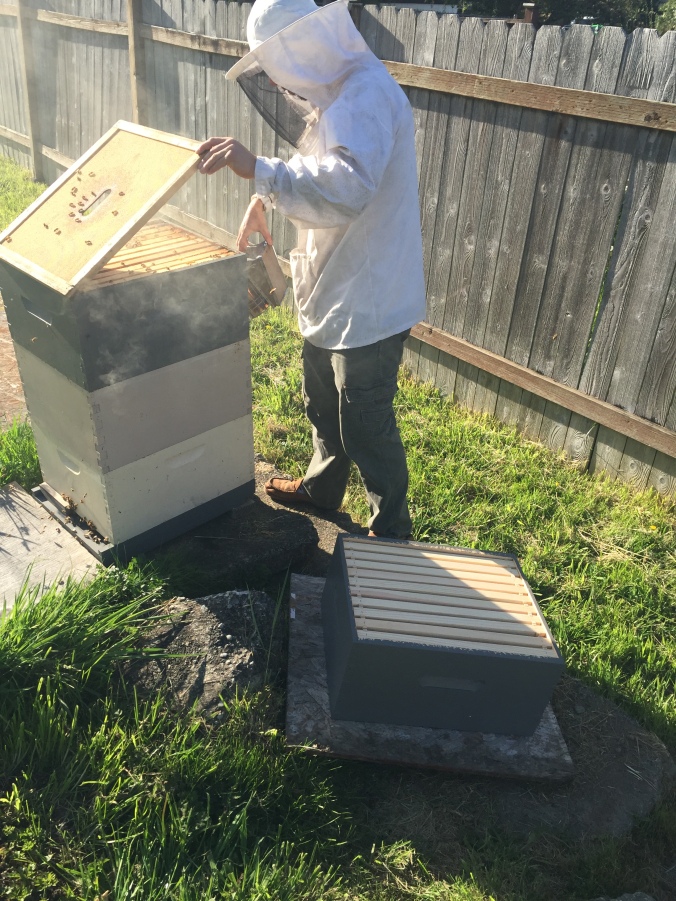 This standard hive tool as pictured below is used to move around the frames inside the box during inspection.  Similar/same here 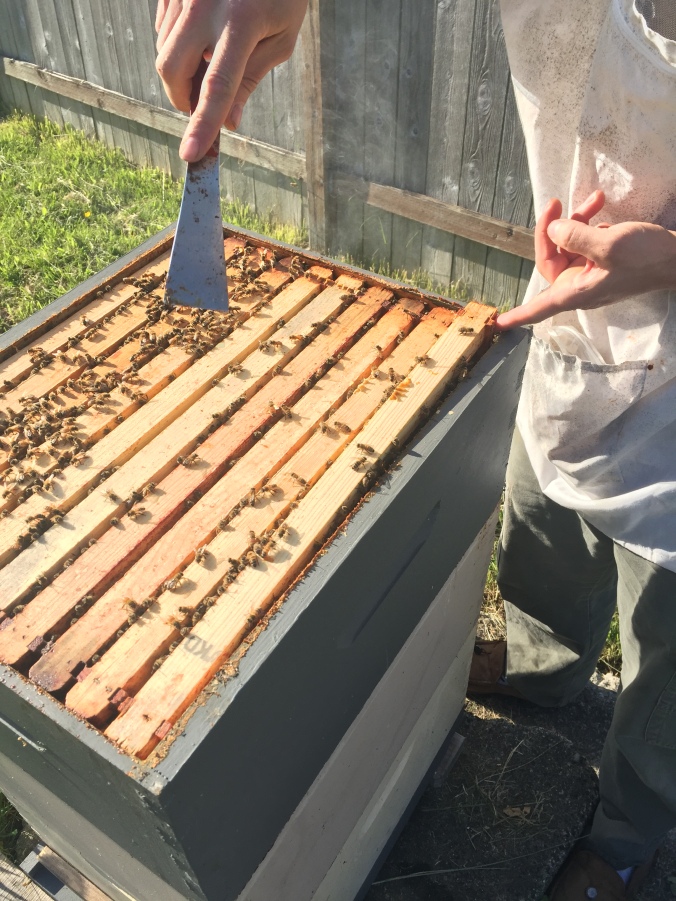 We have a couple of different types of frames inside of our boxes, some that are handmade and the individual cells are made from actual wax, some that are plastic with wax coating. The cells are the little octagon shapes in the frames that you would normally associated with a beehive. I suggest looking on Craigslist or OfferUp for frames/boxes, we’ve found some pretty good deals in the past!

The image below shows a frame that would not be ready for extraction. The bees have only begun to fill the cells with honey. This picture was taken earlier this spring.

Now, don’t be confused with capped honey cells and cells that have baby bees or “drones” in them.  The babies are basically cocooned inside the cells and covered and as they hatch or are opened, you can see their white larvae-like bodies take form, as you can see below in this image from the bottom half-up. The lower right half corner of this image is covered cells with honey…see the difference? Drone cells look similar to the baby cells except they are much larger. I’m not going to go into explaining the role of the drone bee here since the purpose of this post is to go over extraction, but you can read a general overview about them here.

So ideally, the frames you want to extract honey from should look like the one below, almost entirely capped and filled with honey.

So Daniel goes through the hives and pulls out all the frames that he finds are ready for extraction.

We use this extractor  and it does the job. It’s a two-frame extractor so you can extract from two frames at once. The struggle we have found is that because you’re putting two frames in the barrel at once, there can be an imbalance in the spinning process. Also, we’ve experienced the handle falling off of this extractor, not sure if all of them have that defect, but it’s something to be aware of. It’s more of a nuisance than anything, but still usable.

So, before putting the frames into the extractor, you have to individually un-cap all of the cells that the bees have so lovingly capped. (Sorry bees!) There are a couple of ways this can be done. You can use a comb like we did here, or you can use a hot knife which takes some skill and we haven’t tried yet.  We’ve heard that some people prefer the knife, but some prefer the comb, so “to each his own” 🙂

As Daniel uncaps the cells (which is bee-created wax), we scrape that off into a bowl to strain excess honey from later. That wax can also be used to create candles and other fun things, but Ain’t nobody got time for that right now in the Topov household! 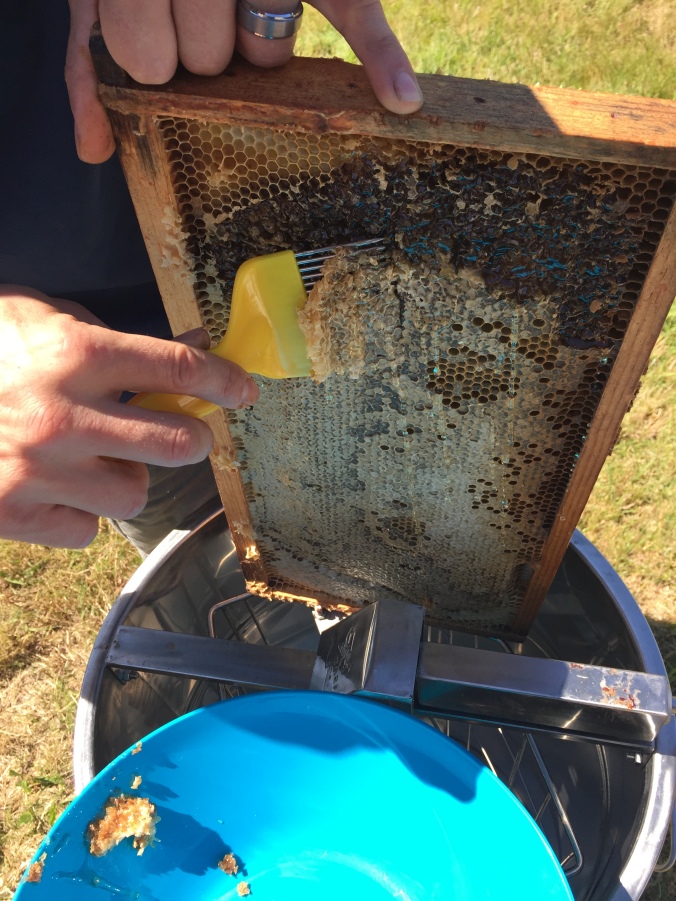 So once either side of two frames are totally uncapped, we drop them into the barrel cavity and spin them really fast so all of the honey is EXTRACTED and goes to the bottom of the barrel. Getting a good visual yet?  Here’s a better image of the inside of the barrel from the manufacturer’s site.

Once we’ve completed spinning all of the frames to empty the honey cells, the honey is at the bottom of the barrel and there is a spout to simply pour it out. Now, there are always going to be chunks of wax that end up in the honey so you really do need to strain out at least all of the big stuff if you just want straight honey. We use a very basic method for this, with a straining pan. Similar/same here It just drains through the strainer into a bowl. You can actually use this strainer over a 5-gallon bucket but we never have a sanitary one of those lying around. Who does, really?! 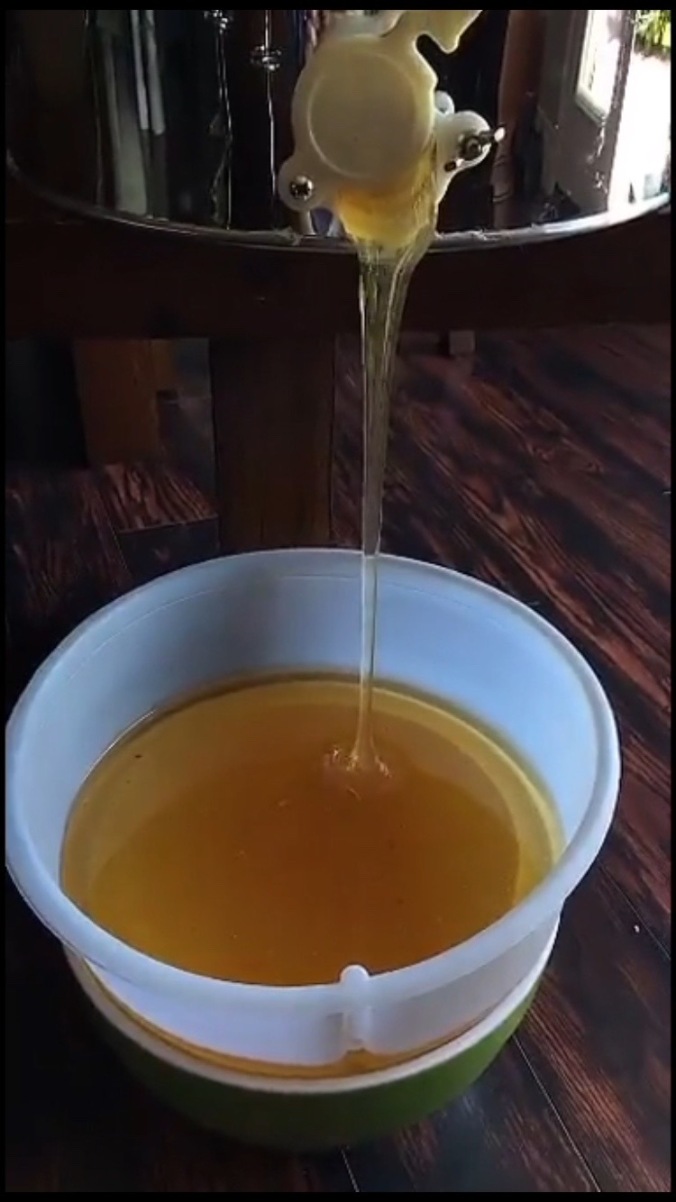 Once strained, that’s really it. Honey doesn’t need preservatives and DO NOT BOIL it to kill bacteria, it’s totally unnecessary and it will actually kill the health benefits of honey.  I’m sure most people know that, but just in case 😉

I think I covered basically everything for the process that we use, but please feel free to ask questions further.

One last quick mention, because people are generally misinformed about bees. Honeybees are NOT aggressive and if we can do this process, so can you. We live in a cul-de-sac, not on a farm. Just check your city’s regulations and make sure your neighbors are comfortable with the idea but if you’re giving them honey, they probably won’t mind as we have found. This is so much less scary and simple than I ever imagined. Give it a go!

6 thoughts on “Honey for Days!”

Tuckered out 😴
Avi’s first adventure going for oysters and he really had to brave the cold 🧡 #33weekspregnant
I’ve been away for 5 days for work while this guy holds down the fort and has been on dad duty and today is his birthday! I couldn’t ask for a better partner in life and he deserves to be celebrated 💕 can’t wait to make up for being gone with a little weekend trip with him and our little man. Happy Birthday babe, love you most!
I’m constantly wondering how he’s going to handle the transition of another baby in the house who demands our attention too. I think there is going to be a minor learning curve to becoming big brother but I’m hopeful. 🧡
%d bloggers like this: